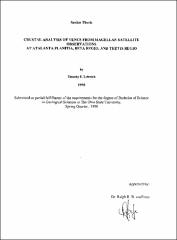 As a result of NASA's Magellan satellite mission, serious questions have arisen concerning the crust of Venus. Venus is very similar to Earth in size and composition, yet different in tectonic style and internal dynamics. For example, the primary mode of heat loss appears to be hot-spot volcanism (Head et al., 1992), whereas on Earth it is plate tectonics and plate boundary volcanism. The relatively young and unmodified appearance of most Venusian craters and their largely random distribution has led some researchers to conclude that a global resurfacing event occurred between 300 to 1000 Ma (Schaber et al., 1992). The possible correlation between modified craters and low crater density with volcanically and tectonically active regions supports the notion that ongoing volcanic activity may represent the primary mode of planetary resurfacing (Phillips et al., 1992; Head et al., 1992). An alternative hypothesis suggests that perhaps volcanism is ongoing on Venus, but at a reduced rate subsequent to a global resurfacing event (Price et al., 1996). Understanding the crustal properties of the different tectonic regions, including the crustal plateaus and their relationships to cold spots and hot spots, is important for developing meaningful models of Venusian tectonics and internal dynamics. A discrete model for the structure and properties of the Venusian crust is essential in constraining models for the tectonic and resurfacing history of Venus. In this paper, I investigate an improved quantitative method for interpreting attributes of the Venusian crust from spherical harmonic topographic and gravity models. I use spectral correlation theory to compare gravity effects of topography against free-air gravity anomalies for the tectonically disparate regions of Atalanta Planitia, Beta Regio, and Thetis Regio. For all three areas, observed free-air gravity anomaly magnitudes are much smaller than the gravity effects modeled from topographic relief and there is strong positive correlation between free-air gravity anomalies, topography, and terrain gravity effects. Adjusting terrain gravity effects for correlated free-air gravity anomalies yield compensated effects that I use to estimate Moho relief and crustal thickness variations of the three study regions. For Atalanta Planitia, the crust appears to be relatively thin with peripherally thickened crust associated with concentric ridge belts and tessera terrain. Crustal thickness may increase rapidly between the interior of this lowland plain and the adjacent periphery and highlands. For Beta Regio and Thetis Regio, crustal thicknesses may approach 40 km and 50 km, respectively. Beta Regio, with its large free-air gravity anomalies and apparent structurally related terrain-decorrelated gravity component, may be a partially compensated region. The lack of anticorrelated topographic and gravity features in these disparate tectonic environments is consistent with a largely undifferentiated and dynamically supported crust, which is ubiquitously distributed over the study regions and possibly the entire planet.