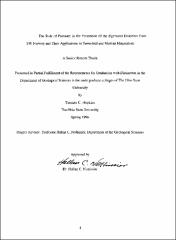 The Egersund Dolerites intruded into southwest Norway between 600 and 700 Ma BP, in what is believed to be an extensional tectonic setting. The dikes consist of olivine tholeiites, tholeiites, and trachy basalts and are likely to have been continental flood basalt (CFB) feeder dikes. Mineralogical and chemical evidence suggest evolution at a pressure corresponding to a depth of 27-33 km with minimal fractional crystallization on ascent. This interpretation is based on a comparison of chilled margin glass and bulk rock compositions with experimental data, ratios of Al^VI /Al^IV in pyroxenes in the groundmass, a foreign gabbro rock fragment, and melt inclusions, and feldspar composition of the megacrysts, groundmass, and melt inclusions. Most continental flood basalts have undergone extensive low pressure (1 Atm) evolution before eruption, erasing chemical evidence for earlier high pressure fractionation, that occurs at the base of the crust. Low pressure evolution had little effect on the Egersund dolerite composition, and thus they represent an unique opportunity to study the early stage of evolution of CFBs. Olivine phenocrysts in the Egersund dikes contain spherical melt inclusions with an unusual Ti-rich amphibole inside called kaersutite. The occurrence of kaersutite in melt inclusions is limited to one other terrestrial cumulate, and to the SNC (shergottites, nakhlites, and the Chassigny) meteorites (presumably of Martian origin). The latter occurrence suggests that the Egersund dolerites can possibly serve as a terrestrial analog for Martian magmatism. Bulk compositions of the SN Cs were plotted on the diospside-olivine-silica triangle, and pyroxenes inside the meteorites and melt inclusions were analyzed for Al^VI /Al^IV. Bulk rock composition plots along the trend for evolution at low pressure (1 Atm), and the partitioning of Al between the VI and IV fold coordination sites suggests a low pressure of crystallization. From this, it is plausible to conclude that Martian magmatism involves large scale low pressure fractionation leading to eruption of large volumes of homogenous magma.