A study of the kimberlite in Elliott County, Kentucky 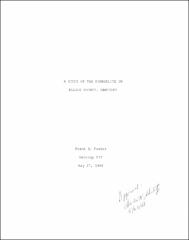 The Elliott County diatremes are basaltic kimberlites occurring as radially arranged groups of apophysis type intrusions centering around a large outcrop on Hamilton Creek. An explosive fluidization intrusion of a gas-solid mixture is indicated by the lack of structural deformation and contact metamorphism of the country rock. The outcrops have identical mineralogy but vary in percent composition of minerals and inclusions because of differences in the degree of alteration, intrusive conditions, and stratigraphy of the country rock. Inclusions of probable upper mantle material, Precambrian basement material, and local wall rock occur indicating the probable source of the kimberlite as the upper mantle. The relationship between garnet color and pyrope content is apparently a result of one color being the first melted fraction of the upper mantle while the other is the residual garnet caught up by the magma as it intruded. Olivine phenocrysts are of two ages indicating a pause in the intrusive sequence which could, according to Bardet (1965), account for the absence of diamond. The 269 m.y. age (Zartman, et al. 1967) of this intrusion corresponds to that of the ultrabasic mica-peridotites of the Kentucky-Illinois fluorspar district. Both lie on one of several deep crusta1 fault zones of the eastern United States craton along which intrusion apparently took place at various times throughout Paleozoic and Mesozoic time.