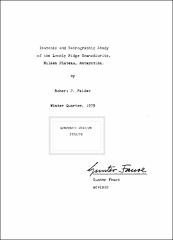 The Lonely Ridge Granodiorite is found on the Nilsen Plateau, which is located just south of the Amundsen Glacier in the central Transantarctic Mountains. The time of crystallization based on the Rb-Sr whole rock isochron method has been reported as approximately 620 m.y. ago. (Faure et al.) Subsequent to crystallization, the rock was subjected to a period of high pressure metamorphism resulting in intensive deformation. Evidence for this is found in thin sections containing strained biotite and quartz showing undulatory extinction, and an overall cataclastic texture. A date of 476 m.y. was calculated for biotite using an assumed initial ^87Sr/^86Sr ratio of 0.704. This date represents the time elapsed since biotite last cooled to the temperature at which it can retain radiogenic ^87Sr, following a metamorphic event. An analysis of feldspar suggests lack of isotopic homogenization among the minerals. The results of this study do not confirm the Rb-Sr date of 850 m.y. of McClelland.