The geochemistry of stream sediments, Panama: weathering in a tropical watershed 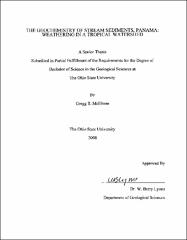 Chemical weathering of Earth's surface is the primary process controlling landscape and soil development, as well as the geochemistry of natural waters. In addition, chemical weathering of silicate minerals, which consumes atmospheric C02, is a major control of long-term climate variation. Although much has been published related to the rates and intensities of chemical weathering for temperate and high-latitude settings, few data exist on chemical weathering in mountainous tropical regions. This study focuses on the Rio Chagres watershed. The Rio Chagres is one of Panama's most important rivers. This 414 krn2 watershed produces a total runoff of 4.4xl 05 m3 per year during years of higher flow, supplying almost half the water required to operate the Panama Canal. The highest areas of the watershed rise to elevations of 1000m. The high rainfall (c.2000mm/yr), warm temperatures (mean annual T° ~ 19°C), and steep forested topography all increase rates of chemical weathering in the watersheds relative to more temperate geographic settings. Samples have been analyzed for the purpose of establishing the intensity of chemical weathering in this environment using X-Ray Fluorescence Spectroscopic (XRF) techniques for both major and trace element composition. Stream sediment geochemistry has been compared to the geochemistry of local bedrock lithologies and normalized to upper continental crust values. XRF analyses of sediments from the Rio Chagres headwaters demonstrate depletion in Ca2+, Sr2+, Ba2+, K+ and Rb+ relative to average upper continental crust, suggesting rapid loss of these elements. Grain-size analyses of the stream sediments suggest there is a positive relationship between sediment size, the rate of chemical weathering and the watershed geology. Watersheds draining mostly altered volcanic lithologies have mainly sand-size sediments by comparison to watersheds draining mainly intrusive mafic lithologies which tend to have coarser sediments. These data, combined with previously reported water geochemical data, suggest intensive weathering of the altered volcanic lithologies and that the intrusive mafic lithologies are not being weathered at the same rate or intensity as the volcanic lithologies.