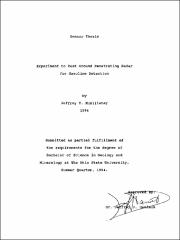 Ground Penetrating Radar (GPR) is a shallow, noninvasive, geophysical survey technique. It has been used in the past for detection and mapping of Light Non-Aqueous Phase Liquids (i.e., Hydrocarbons). With the increasing contamination of ground water supplies by substances such as hydrocarbons, an inexpensive, reliable, and simple geophysical technique such as GPR is a must. Although the scientific community knows that GPR works, they do not know exactly what contamination zone (i.e., gasoline saturation, vapor, etc...) the GPR system actually detects. It is also unknown exactly how these different gasoline zones effect the velocity of the GPR waves. This thesis presents an overview of 1) the fundamentals of GPR, 2) geologic applications, 3) subsurface contaminants, and 4) detection of contaminants in the field. These sections will be followed by an experiment that tests the ability of GPR to detect gasoline in a perfectly homogenous medium.