Significance of an occurrence of an Upper Ordovician zone index conodont, Amorphognathus ordovicicus, in the Richmondian of Southeastern Indiana 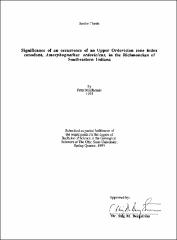 The focus of this study was the acquisition of elements of the genus Amorphognathus, a biostratigraphically important conodont genus, that would allow clear and positive determination of species and clarify the North Atlantic Province conodont biozonation of the Upper Maysvillian - Lower Richmondian stages of the Cincinnatian Series. Samples were collected from three stratigraphically well-classified outcrops around Brookville, Indiana in an attempt to sample a 'deeper water' facies of the Cincinnatian (Upper Ordovician) in its type region. Fifteen transitional elements of Amorphognathus ordovicicus- A. superbus and three unquestionable A. ordovicicus elements have thus far been isolated from two of these sections. These specimens are the first recovered from the type Cincinnatian that can be identified with certainty as A. ordovicicus, which is a zonal index species. Previous studies have shown A. superbus to be present in the Miamitown Shale. Specimens of A. superbus have also been recovered from a core at an interval that corresponds to approximately thirty meters below the studied section. Based on the presence of the transitional forms, as well as typical specimens of A. ordovicicus, near the Waynesville-Arnheim contact, it appears that the A. ordovicicus - A. superbus Atlantic Province Conodont Zone boundary lies within the uppermost Arnheim Formation. The stratigraphic position of this boundary compliments macrofossil evidence suggesting that the typical Richmondian shelly fauna appears within the Arnheim Formation. This enables, for the first time, not only higher resolution correlation with sucessions in Baltoscandia and Great Britain but also this will clarify the depositional history of the Upper Ordovician in North America.