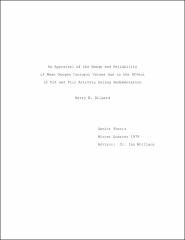 In this paper I have discussed the meaning of oxygen isotopic ratios and what causes them to vary. These causes included fractionation, temperature changes, and other relevant variables. I also discussed what would make their mean values vary, namely the effects of cut and fill features due to erosion and drifting. I attempted to measure the effect that cut and fill would have on the mean values by determining a range, a ± variation, of the mean δ18O. This was done by using pit profiles and computing new means which resulted from gaps placed within the profile. These were compared to the original mean value to determine how it varied due to gaps of differing sizes. These ranges were then combined with a probability distribution of gap sizes to give an average range for each pit. These varied from ± .0425 o/oo to ± .0694 o/oo for thicknesses of firn equal to 19 years accumulation in each pit. I discussed some possible reasons for the variations seen in these average ranges from pit to pit, but it appears there is no definitive answer available from the data at hand. I concluded that the ranges are not significant for paleotemperature determinations. But, they may be important for future studies of the effect of elevation on oxygen isotopic ratios.