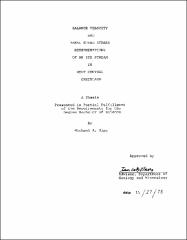 A theoretical model based on balance velocity and basal shear stress is applied to an ice stream flowing into Jakobshaven Isford glacier Greenland. Balance velocity is defined by Whillans (1977) as a measure of the time change of the mass of a column through the ice thickness. Balance velocities were calculated for eleven stations along the flow band from surface data such as ice thickness, accumulation, and flow band width. Basal shear stress is the stress located near the base which results in the slippage of the ice over the permafrost resulting in movement of the ice mass. Basal shear stress was calculated at the eleven stations using data such as ice thickness and surface slope. The results from the calculations were then plotted on a graph to illustrate their relationship along the flow band. Increasing values of basal shear stress were found associated with increasing values for balance velocity. This is typical of glaciers which are frozen to their base. However, Weertman (1969) theoretically concludes that a water layer would exist at the base of the ice stream. The thickness of the layer which is unknown could then account for some of the variations in the velocities. If the water layer exists, the values for basal shear stress would seem too large to be representative of the area.