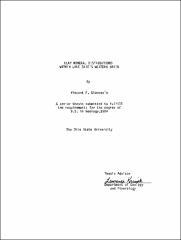 Sediment samples taken from the Detroit, Maumee, Portage, and Sandusky Rivers were analyzed for their clay mineral contents by a procedure that may be called semi-quantitative in its nature. This data was then compared with similar data from sediment samples taken within the Western Basin of Lake Erie, in order to establish a general sediment distribution pattern based on traceable clay mineral assemblages of the fluvial sediments. The clay minerals were identified and semi-quantitatively analyzed by comparing characteristic basal peak areas read from x-ray diffractogram patterns The data show that there is a definate uniformity in clay mineral percentages of both the sediments being transported by the rivers emptying into the Western Basin of Lake Erie and the surficial basin sediments. Because of this uniformity, mineralogical distinctions based solely on clay mineral assemblages cannot be made; in addition, no general conclusions be drawn as to overall distribution patterns of fluvially transported sediments within the waters of the Western Basin of Lake Erie.