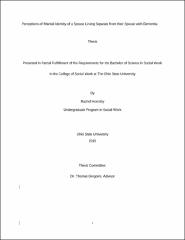 Couples who want to stay together until their end years often have to keep their bond strong and be prepared to face life’s hardships with each other. Sometimes illness can affect one of the partners, which can cause stress on the relationship. Couples who have one spouse with dementia may face many difficulties within their marriage. Some spouses may not be able to care for their ill spouse adequately and have to place their spouse in residential care. The separation of the spouse can produce many changes within the marriage. There is little research on the bond and identity that spouses have on their marriage once their spouse with dementia is placed in residential care. The study focused on the perceptions of the marriage by the independent spouse. The purpose of the study was to determine if and how the spousal identity of the couple has been affected by having to institutionalize the spouse with dementia. The study examined how the connectedness that the independent spouse feels towards the institutionalized spouse has been altered since the separation. The study had nine interviews with various spouses who live apart from their spouse who has dementia. After the interviews were conducted the data was analyzed to discover reoccurring themes within each of the interviews. Results found that spouses have accepted their current roles in the marriage as not being the primary caregiver, but they still want to have some responsibility in the care of their spouse. The study hopes to provide details and impactful information of the lives of spouses living separate from their spouse with dementia to benefit other spouses who are in the same situation or one day might be.