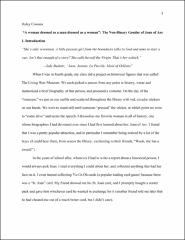 The fifteenth-century soldier/martyr/heretic Joan of Arc still captures our imagination as a feminist icon. Throughout my reading life, Joan has been a prominent figure, appearing as herself or in representational forms in fantasy bestsellers, children’s literature, and short stories. However, her gender and sexuality presentations vary greatly among these works. Often, the historical figure of Joan is simplified or altered to make the characters fit into parameters within a gender and sexuality binary, to keep the distinct categories of “male” and “female” intact. In this project, I have explored how the myriad interpretations of the historical Joan are at work in fictional portrayals of her, as well as how these figures speak to norms of heterosexual femininity. I begin by synthesizing primary and secondary sources pertaining to the historical Joan to examine how her contemporaries (and she herself) might have viewed her gender and sexuality. Using this foundation, I examine three contemporary works that contain either Joan herself or figures that represent her mythos: the popular "A Song of Ice and Fire" series by George R.R. Martin, the young adult "Protector of the Small" series by Tamora Pierce, and the short story “Joan, Jeanne, La Pucelle, Maid of Orléans” by Judy Budnitz. In different ways, Martin and Pierce’s Joan-like characters are simplifications of the historical Joan, ones that work to situate her more neatly in universes that maintain two binary categories for gender, even as their heroines move between those categories. In contrast, Budnitz’s avant-garde short story uses its narrative structure and characters to play with preconceived notions about singular identity and perception, creating a Joan story that, while fantastical, might be more authentic to her person. My work suggests that we often still apply rigid binary categories to Joan of Arc, one of our most popular feminist icons, and that by more closely examining the way that these categories work in our understanding of her, we can better understand how they work (or rather, fail) towards our understanding of ourselves.