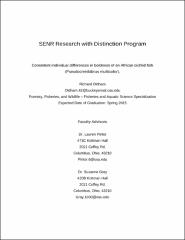 Recent research in animal behavior acknowledges that in many species, individuals exhibit consistent differences in behavior across time and ecological contexts (known as behavioral syndromes or animal personalities). Individual variation in behavior can be described as a trait (bold, shy, curious, social, aggressive, etc.). The behavioral trait studied here is boldness, or how an animal reacts to a situation perceived as dangerous. Boldness was measured by observing an individual’s foraging and anti-predation behavior after a simulated predation attack using a model predator. Individuals used in the study were F1 generation of wild caught cichlids (Pseudocrenilabrus multicolor) which came from two environmentally distinct habitats in Uganda, Africa (Bwera – swamp with low turbidity, and Bunoga – river with high turbidity). Preliminary results suggest individuals from the swamp population display individual differences in both foraging and anti-predation contexts, and their behavior is significantly repeatable. Data collection of the river habitat population is still being taken and further analysis is planned.