An Eye for an Eye: ETA Terrorism and Democracy in Post-Franco Spain 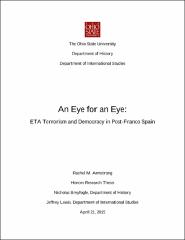 On February 6th, 1981, engineer José Maria Ryan was found in the woods. He had a bullet in his neck and a mouth full of cotton. Euskadi Ta Askatasuna (ETA) “Basque Homeland and Freedom” claimed responsibility. Three days later, 200,000 Spaniards gathered in the streets to protest ETA’s violent act. By February 13th, a suspected ETA member named José Arregui Izaguirre was tortured to death in a Madrid prison. Outraged at the government’s brutality, 110,000 protesters flocked to the streets. Spain, newly democratized in 1975, was straining under the weight of a two-decade long terrorist insurrection. While the nation endeavored to consolidate a “government by the people,” elements of the hard-fisted fascist regime remained. Instead of calming the conflict, the government countered ETA’s violence with like-minded brutality. During Spain’s six-year democratic transition, ETA attacks increased, followed by government retaliation. Early 1981 signified a breaking point. Spain’s cycle of reactionary violence was met with backlash by the population, contributing to Prime Minister Adolfo Suárez’s resignation on January 29th. A month later, right-wing Civil Guard members, nostalgic for the stability of General Franco’s authoritarian rule (1939-1975), stormed parliament in a coup attempt. The plot failed, but it highlighted the fragile state of Spanish democracy. Both ETA and the government opposed a restored dictatorship, but years of retaliatory torture, assassinations, midnight kidnappings, and secret arrests had unintentionally weakened the fledgling democracy. By the end of 1981, ETA violence plummeted. Its violent tactics had proven counterproductive in the newly democratized environment. This study examines the relationship between political structure and terrorist violence in the context of Spain’s democratic transition. Although counterintuitive, democratic governments can perpetuate terrorism through hardline counterterrorism crackdowns. As evidenced in Spain, the use of authoritarian practices by democratic states delegitimizes the government, alienates the people, and renews the terrorists’ resolve.