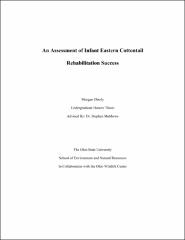 Eastern cottontails (Sylvilagus floridanus) are the most common species brought to the Ohio Wildlife Center for rehabilitation, but many of these are likely brought in unnecessarily. Eastern cottontails raise young to bring little attention to the nest, staying away during the day, which leads people to believe infants are in need of care. In cases where this is mistaken, less adequate care is provided for the rabbits in rehabilitation facilities than they would receive in the wild from a parent. Rates of successful rehabilitation leading to release are low for this species, and infants are easily stressed and difficult to raise in captivity. Infant eastern cottontails rely on their mothers to provide gut microbes, but individuals in rehabilitation centers do not receive these microbes, leaving them more prone to infections. Goat’s Milk and Goat’s Milk Formula were fed in trials from March-October 2014 at the Ohio Wildlife Center Hospital, replacing the hospital’s regular formulas of Pedialyte and Starter/Ultra. It was hypothesized that these formulas would better suit the needs of the rabbits and increase survival rates. All other factors of care were kept consistent, and individuals were randomly placed in trial groups for their feeding plan. The data was analyzed with logistic regression to test for the influence of feed type on survival, including a continuous covariate of weight at admission of the individuals. The formulas, however, did not significantly increase survival. Instead, weight upon admission was the only significant factor linked to successful release (0.095±0.01, p<0.01). Because formulas cannot replace a parent’s care and survival increases as eastern cottontails grow older and less reliant on formula, the main challenge rehabilitation facilities face in trying to increase survival rates is mitigating improper human intervention in the natural history of eastern cottontails.