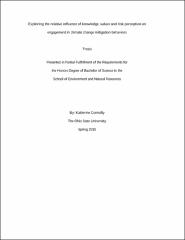 As one of the largest emitters of greenhouse gases in the world, the United States and its citizens will undoubtedly play a pivotal role in climate change mitigation. Yet, despite the scientific consensus on the topic, most Americans are not taking significant steps to address climate change. In order to understand this inaction and more effectively motivate individuals to change their behavior, it is important to examine the psychological processes related to engaging in climate change mitigation behaviors. This study examined the relative influence of knowledge, values and risk perception on climate mitigation behaviors among Columbus, Ohio residents. As hypothesized, higher levels of knowledge regarding the causes and effects of climate change, strong self-transcendent values, and increased risk perception were all positively related to engagement in climate mitigation behaviors. Contrary to expectation, values were the single strongest predictor of behavioral engagement, followed by knowledge. Furthermore, risk perception was not a significant predictor of behavior nor did it strongly mediate the relationship between knowledge/values and behavior. Overall, Columbus residents had only a moderate understanding of climate change, identified slightly more with self-transcendent values, as opposed to self-enhancement ones, and did not perceive climate change to pose a large personal risk. Based on these results, future climate change communication efforts in Columbus should emphasize the most significant causes of climate change, while also appealing to personal values. More research is needed to examine the influence of risk perception and why the variable did not perform as predicted.