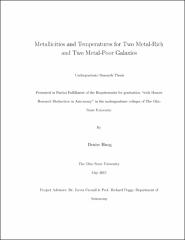 We observed H II regions in the star-forming galaxies IC 342, NGC 855, I Zw 18, and DDO 53 with the Multi-Object Double Spectrograph (MODS1) on the Large Binocular Telescope (LBT) to measure their gas-phase oxygen, nitrogen, argon, sulfur, and neon abundances. By detecting at least one temperature-sensitive auroral line in the optical range ([O III] λ4363Å, [N II] λ5755Å, [S III] λ6312Å, or [O II] λλ7320,7330Å), we can measure "direct" gas-phase abundances for the H II regions in our sample. We can also use the strong-line ratios to infer a trend in metallicity and temperature as a point of reference for our measurements. We selected the galaxies in our sample to take advantage of new far-infrared data from Herschel Far-Infrared Space Telescope taken as part of the Key Insights on Nearby Galaxies: a Far-Infrared Survey with Herschel (KINGFISH). This permits the measurement of the [O III] λ88 μm fine-structure line, which is relatively insensitive to temperature and can be used with the temperature-sensitive [O III] λ5007Å emission line to more tightly constrain temperature estimates than the weak auroral lines. We find oxygen abundances generally in agreement with previously reported results in the literature, and temperatures consistent with those metallicities.