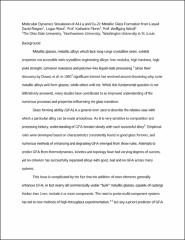 Metallic glasses, a metal lacking any long-range atomic ordering, represent an opportunity to usher in the next generation of engineering materials. Metallic glasses have a unique property set, filling a niche not accessible by any existing materials class: high strength, low modulus, low density, corrosion resistance and net-shape processing techniques. Current theoretical understanding consists of a handful of empirical rules, and the absence of universal predictive criteria for the formation of metallic glass has been a standing issue since their discovery in 1960. The lack of mechanisms understood to compel certain metallic liquids to form amorphous structures and not others, is the single greatest barrier to wide-spread future application of metallic glasses. Using molecular dynamics simulations, structural properties of two systems were considered and compared: Copper-Zirconium, an excellent glass former, and Aluminum-Lanthanum, a mediocre glass former. We propose that a better glass forming system undergoes a subtle and gradual transition from liquid to glass, with crystallization being the most extreme possible path. Tracking each atom’s nearest-neighbor coordination allows the relative severity of the transition from liquid to glass to be ascertained, and subsequently quantified. Comparing traits of glass formers and non-glass formers from each system revealed consistencies in their behavior and an underlying mechanism paramount to glass formation: drastic coordination changes in the undercooled liquid inhibit glass formation, while liquids which remain relatively unchanged, or gradually shuffle their neighbors prior to extreme undercooling form glass more readily. Additional analysis reveals that many relevant characteristics are obtained by looking at changes in just one coordination number, without controlling for topological effects. Most importantly, these results accurately separate glass formers and non-glass formers in the Al-La system.