Relationship between Oxytocin and Growth in Premature Infants 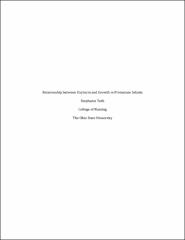 Infants born extremely premature (less than 29 weeks gestation) are at high-risk for inadequate growth because of the effects of acute illness. Researchers have demonstrated that these infants are often discharged from the neonatal intensive care unit (NICU) with weights below the 10th percentile. It is important to identify factors that promote growth. One promising factor is oxytocin. Limited findings from animal models suggest that there is a relationship between weight gain and oxytocin levels. This relationship is not well understood and has not been examined in premature infants. The purpose of this exploratory study was to examine the relationship between oxytocin and weight gain in extremely premature infants. The study hypothesis was that higher oxytocin levels would be associated with better weight gain. The sample was comprised of 25 premature infants in the NICU born between 25-28 6/7 weeks of gestation who were followed until 34 weeks gestation. Urine was collected at two weeks of life and then weekly until 34 weeks gestation to measure oxytocin. Weekly weights were also recorded from the medical record. After completion of data analysis, no significant relationship was found between oxytocin levels and growth velocity. However, this study serves as a foundation for further investigation.