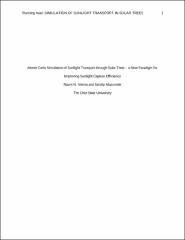 Solar photovoltaic (PV) cells arranged in complex 3D leaf-like configurations—referred to as a solar tree—can potentially collect more sunlight than traditionally used flat configurations. It is hypothesized that this could be because of two reasons. First, the 3D space can be utilized to increase the overall surface area over which the sunlight may be captured. Second, as opposed to traditional flat panel configurations where the capture efficiency decreases dramatically for shallow angles of incidence, the capture efficiency of a solar tree is hampered little by shallow angles of incidence due to the 3D orientation of the solar leaves. In this paper, high fidelity Monte Carlo simulation of radiation transport is conducted to gain insight into whether the above hypotheses are true. The Monte Carlo simulations provide local radiation flux distributions in addition to global radiation flux summaries. The studies show that except for near-normal solar incidence angles, solar trees capture sunlight more effectively than flat panels—often by more than a factor of 5. The Monte Carlo results were also interpolated to construct a daily sunlight capture profile both for mid-winter and mid-summer for a typical North American city. During winter, the solar tree improved sunlight capture by 322%, while in summer the improvement manifested was 57%.