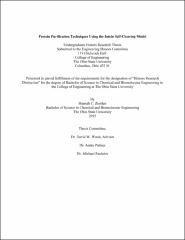 A central step in the production of high purity recombinant proteins is their separation and purification. Recombinant proteins are expressed in host cells from which they are collected and purified. Purification is necessary to separate target recombinant proteins from the unwanted contents of the host cells in which they are grown. Common methods employ several chromatographic steps, which requires optimization, the use of expensive resins, and large time investments. Another category of purification utilizes affinity tag sequences. Within this realm, affinity tags can be used in conjunction within the protein’s naturally occurring, self-cleaving intein. Using the intein simplifies the purification into a one-step chromatography purification. In this method, an affinity tag, characterized by its ability to selectively bind to a specified resin, is fused to a target protein. This allows for the protein to be selectively separated from unwanted proteins and cell debris. Then, a pH shift induces the intein’s self-cleaving capabilities, and the target protein can be separated from the resin and affinity tag. Non-chromatographic affinity tags exist which eliminate the need for affinity resins. The elastin-like polypeptide (ELP) tag is one such sequence. The use of ELP tag with the self-cleaving intein, makes it possible for purifications to be done independent of an affinity column. Shifts in salt concentration and pH lead to successful purifications of the target protein. ELP has a large and repetitive protein sequence which requires large amounts of energy for synthesis. By shortening the length of ELP, expression can be increased by freeing some of that energy. In order to test this, and to determine the optimal ELP tag length, which may be affected by size and solubility of the target protein, five different ELP tag sizes are studied. Another tag, the maltose binding protein (MBP) affinity tag, is commonly used in chromatographic purification processes due to its ability to selectively bind to immobilized amylose. The MBP-tagged target protein binds to an amylose resin. Then, a pH shift causes the intein to undergo a cleaving reaction, allowing the target tag to be separated from the affinity sequence. In an effort to increase the economic feasibility and simplicity of the MBP purification, the amylose resin is replaced with a starch solution. The backbone of starch is primarily composed of amylose units. Starch, which contains negatively charged ionic groups, can be easily salted out of solution. By allowing starch, in solution, to bind to an MBP-tagged target protein, the target protein can be separated from other proteins and cell debris via a salting out method. The target protein is further purified via a pH shift in the purification buffer. Because starch and salts are relatively cheap, the success of this approach will lead to a new, feasible option for mass purification and production of proteins. During the expression, proteins go through a folding process. In some cases, the recombinant proteins do not fold correctly, inactivating or altering the protein’s functionality. This is problematic in cases when the protein will be used to develop vaccines, such as the third protein discussed here. Initial results showed that, during column purification, the protein becomes aggregated so it cannot be recovered from the column’s affinity resin. In order to combat this problem, a Flag-Acidic-Target Tag (FATT) will be added to the protein using a polymerase chain reaction. FATT is made of three parts: the flag, the hyperacidic region and a target tag. The flag makes the tag easily detected. The hyperacidic region expresses well in E. coli, is also highly charged, so can be purified in a single step using a standard anion exchange chromatography resin, and most importantly, has been shown to promote correct protein folding during expression. It aids in proper refolding of misfolded fusion partners containing disulfide bonds due to the structure of the hyperacidic region, which acts as a shield-like non-specific chaperone for the target protein during in vitro expression and refolding. The tagged protein will be purified using column purification where it will selectively adhere to the column and be separated at a high purity. In all three experiments described here, protein yield will be determined using qualitative methods such as sodium dodecyl sulfate polyacrylamide gel electrophoresis (SDS-PAGE), and quantitative methods, including activity and Bradford assays.