The Cross-Domain Priming of Language and Motor Rate 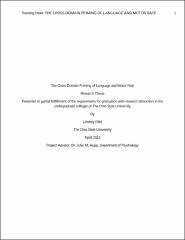 Previous research has indicated a possible connection between language, visual, and musical domains suggesting domain-general processing of temporal information. While some within-and cross-domain research has been conducted, little behavioral research has investigated a possible connection between the language and motor domains. The current research investigated a connection between the motor and language domains in temporal processing. It was expected that participants primed with a fast motor rate would speak at a faster rate, and those primed with a slow motor rate would speak more slowly. Participants (n = 81) were primed with a specific rate (fast/slow) in the tactile domain only, or both the tactile and motor domains, and were asked to produce speech (language domain). Speech rate was measured to determine if speech was affected by the rate of the motor or tactile primes. No significant main effects were found of Condition (tactile only or tactile and motor) or Rate of Prime (fast or slow). However, an interaction of Gender and Rate was found, F(1,73) = 4.63, p < .05, such that females were influenced by the rate of the prime in the expected direction (e.g., fast prime led to faster speech), F(1,49) = 2.30, p = .14, while males were influenced by the motor prime in the opposite direction (e.g., fast prime led to slower speech), F(1,28) = 2.84, p = .10. Previous research has found gender differences in the human mirror system, which may indicate that females may be better able to imitate behavior than males. This may account for the gender differences in the current study, such that females may have been more likely to mirror the rate of the prime, and this led to the expected effect on speech rate. These results have implications on social and linguistic research on gender differences in communication, and the future directions of cross-domain processing.