The impact of microRNA-3151 in BRAF-mutated human malignancies 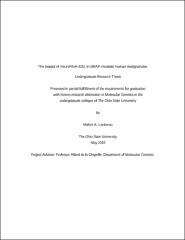 The gene B-Raf proto-oncogene serine/threonine kinase (BRAF) is the most frequently mutated gene in malignant melanoma (MM) and is causally involved in melanoma and papillary thyroid cancer (PTC) carcinogenesis. Mutated BRAF is associated with an aggressive disease phenotype, thus making it a top candidate for targeted treatment strategies in MM and PTC patients. We show that mutations in BRAF in both MM and PTC lead to increased expression of a small non-coding RNA, miR-3151. Reducing miR-3151 expression decreases cell viability and increases apoptosis rates in MM and PTC. Thus, miR-3151 may be a novel downstream effector of mutated BRAF, which contributes to the aggressive phenotype associated with BRAF mutations. Using a targeted RNA sequencing approach we determined that miR-3151 directly targets TP53 and other members of the TP53 pathway. As determined by confocal microscopy and nuclear fractionation, knock-down of miR-3151 in MM and PTC cells increased TP53 expression and also favored its nuclear localization. To determine whether targeted knock-down of miR-3151 may have therapeutic potential in MM and PTC, we tested whether a simultaneous treatment of MM and PTC cells with the FDA-approved BRAF inhibiting drug vemurafenib and knock-down of miR-3151 with a small hairpin RNA would add on to the effects of sole BRAF inhibition. Indeed, combined inhibition of mutated BRAF and miR-3151 significantly increased cell death and lowered the dose of vemurafenib required to achieve the observed effects. Taken together, we suggest miR-3151 as a novel player in BRAF mutated malignancies, which acts by direct targeting of the tumor suppressor TP53 and several of its pathway members. Targeted knock-down of miR-3151 may increase the effectiveness of sole BRAF inhibition in MM and PTC.