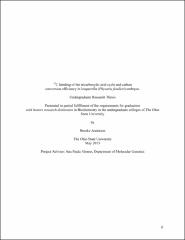 Lesquerella (Physaria fendleri) is a Brassicaceae that produces a valuable class of compounds in its embryos called hydroxy fatty acids. These fatty acids are used widely in industry to produce cosmetics, coatings, greases, plastics, paints, and biofuel, among others. The current source of hydroxy fatty acids is ricinoleic acid from the castor plant (Ricinus communis), which also produces the highly toxic compound ricin that has eliminated castor plant cultivation in the United States. Lesquerella produces lesquerolic acid, a hydroxy fatty acid with only two additional carbons as compared to ricinoleic acid, which therefore performs in a chemically similar manner. Since it is non-toxic and already grows in the wild in the southwest US as a winter annual that will not compete with food crops, lesquerella could serve as a suitable alternative to castor oil. However to become economically viable, lesquerella first must be engineered to produce more of these fatty acids to meet demands.