Response of grafted glyphosate-resistant and conventional soybean plants to glyphosate 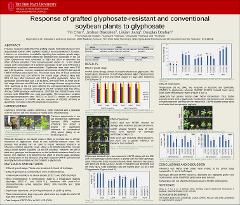 Previous research established that grafting imparts herbicide tolerance from a glyphosate tolerant (RR) soybean rootstock to a conventional (CN) scion. However, no information is available regarding how soybean growth stage, genotype and environment affects the tolerance level expressed in the CN scion. Experiments were conducted in 2013 and 2014 to determine the effect of these variables. Three soybean growth stages (3， 6 and 10-leaf stage), graft combinations of 6 soybean genotypes (3 CN and 3 RR) and 2 temperature conditions were evaluated. Glyphosate rates used were 0.84 and 1.68 kg ae/ha. In every experiment all chimeras of CN/CN died and all RR/RR chimeras were injury free. The mean injury level of 3-leaf and 6-leaf stage chimeras was 72% while for the 10-leaf stage chimeras injury was 63% 24 days after treatment with 0.84 kg ae/ha glyphosate. When the glyphosate concentration was 1.68 kg ae/ha, the injury level of 3-leaf and 6-leaf stage chimeras was 83% and the 10-leaf stage chimera injury level was 74%. Genotype of the CN scion affected the expressed tolerance level of CN/RR chimeras; whereas, genotype of the RR rootstock had less effect. Among CN/RR genotype combinations, 352/9392 and 352/9328 were most tolerant while 5388/9392 was most susceptible. The temperature variation (day/night temperatures were 28/22°C or 24/18°C) showed no significant effect on tolerance of CN/RR, but the tolerance of 352/352 (CN/CN) to glyphosate increased when the temperature was lower.