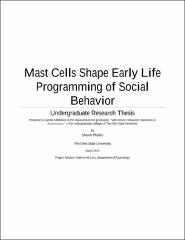 Inflammation during development increases risk for neuropsychiatric disorders, including autism. Mast cells are a type of innate immune cells present in the brain that modulate inflammation. However, their role in brain development is unknown. We have previously shown thousands of mast cells reside in the developing rat brain suggesting that they may mediate the effects of early life inflammation. The goals of these experiments were to characterize effects mast cells play on the development of social behaviors. To determine if mast cells participate in regular programming of social behaviors, we pharmacologically activated or inhibited mast cells during the neonatal period and tested social interaction behavior in adulthood. We found that social avoidance was decreased in males following mast cell activation. There were no effects on active investigation or passive interaction. Early life activation led to life-long increases in the brain mast cell population. We next utilized a prenatal allergic immune challenge to better simulate physiologically-relevant mast cell activation during development. We performed a social play test on juvenile rats, and found that they engaged in less social play behavior than the control group. We are currently testing the effects of allergic challenge on social interaction behavior in adult rats. We are also assessed the effects on allergic challenge on the number of mast cells in the in brain regions, and found that hippocampal mast cell up-regulation with allergic challenge correlates to the observed behavioral decreases in male juvenile play, however females also showed a decrease in rough and tumble behaviors that did not correlate with mast cell differences. Because neuropsychiatric disorders are more prevalent in males and our lab has previously found marked sex differences in the number of mast cells in the developing brain, we determined that males and females respond differently to prenatal allergic challenge. Together these studies show that mast cells may play a key role in the early life programming of social behavior, and activation of these cells following early life inflammation may contribute to the ontogeny of autism.