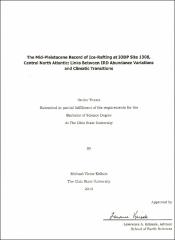 This project examines sediment samples from IODP Site 1308 in the central North Atlantic to reveal details about the history of glacial fluctuations from 292 thousand years ago (kya) to 525 kya. The project is based on a compositional analysis of 65 sand-fraction samples, taken at a sampling interval of ~ 3600 years. The sediment compositions are used to identify potential sources, thereby defining the areas of glacial fluctuations on adjacent landmasses. Samples were examined using a binocular microscope to determine sediment composition and component abundances. Sample ages were assigned using a published oxygen isotope stratigraphy for Site 1308, and ages were then correlated to Marine Isotope Stages (MIS), which catalog alternating warm and cool periods in the Earth's paleoclimate, with even-numbered stages representing glacial periods and odd-numbered stages representing warm interglacial periods. This study reveals that the relative abundance records of ice-rafted debris (IRD) and biogenic components (foraminifers) can be subdivided into 4 intervals, defined by fairly regular variations in the relative abundances of these two components. Within the IRD component, variations in the relative abundances of quartz and fine-grained mafic rock fragments are consistent with the 4 intervals defined by variations in the relative abundance of IRD overall. IRD generally is more abundant during glacial stages and during stage transitions. This relationship is illustrated well within MIS 12 and during the MIS 12/11 transition. However, IRD is also abundant during some interglacials, indicating that IRD supply to this location in the North Atlantic is not controlled solely by global climate state.