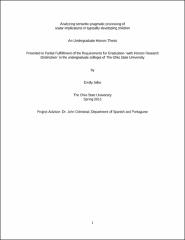 This research examines the use of the quantifier “some” in English. Past research indicates that both semantics and pragmatics, or the context of the situation, dictate the meaning of the word. Previous work has shown that features that matter for the interpretation of the quantifier include syntactic context (downward entailing vs. non-downward entailing) and pragmatic context, for determining whether a scalar implicature meaning “some, but not all” will be associated with it. Less attention has been paid to the phonological properties of the quantifier, which turn out to be capable of determining its meaning by themselves. These properties include whether a full or reduced vowel is produced and whether or not a pitch accent is associated with it. For example, the vowel-reduced version, sm, implies an existential or “logical” interpretation of some. This can be interpreted as a “some and possibly all” meaning. Another, spoken with a L+H* pitch accent, SOME, has a pragmatically influenced “some, but not all” conversational, scalar, quantity implicature. The final variation, some, holds an intermediate status, has a full vowel, unlike sm, but lacks a pitch accent, like SOME, and may or may not occur with an implicature. A question that does not appear to have been asked before is what happens when an existential quantifier, such as some, marked with a L+H* pitch accent, occurs in an implicature-cancelling downward-entailing environment, such as the antecedent of a conditional sentence. Does the grammatical context “win” and cancel the implicature, or does the prosodic contour “win” and generate the implicature? Further, given earlier findings that preschool children pay attention to a quantifier’s duration rather than its pitch, at which age do children become adult like? To answer this question we used a Truth Value Judgment Task in a between-subjects design with six groups (3 groups of adults, n=113 ; and 3 groups of children n=92 , age range=4;0–8;8, mean age=71 months, SD=12.39 months). Tentative conclusions are that adult interpretations are influenced by both pitch accent and grammatical context. Children appear to largely disregard pitch and attend to duration.