About Authoring: Brothers: A Tale of Two Sons as a Semiotic, Narrative, and Rhetorical Text 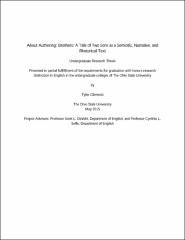 I began my research with personal experience playing video games and a formal education in English studies. My interest and my education intersected to form a simple question: what tools does an education in English studies offer to someone trying to understand video games as texts? To answer that question, I brought scholarship from three English sub-fields—semiotics, narrative theory, and rhetorical study—into discussion with computer gaming scholarship. My research demonstrated three primary findings: 1) video games can considered as texts that communicate via visual, aural, and interactive (often tactile) modes; 2) video games are narrative and offer players varying degrees of authorship over narrative elements; and 3) video games are rhetorically designed, even down to inscribing meaning in the control schemes that players use to engage with the game. I brought those research findings to a thorough analysis of Brothers, a critically acclaimed video game released in 2013. The resulting analysis finds Brothers to be a carefully composed text, one which offers players control over narrative satellites (minor, connective events) but not kernels (essential plot events), and conveys its central theme and narrative (one of growing companionship) through an unconventional control scheme. My research demonstrates the values of applying the theoretical frameworks of English studies to the analysis of video games and bringing the new texts to the broad field of English studies.