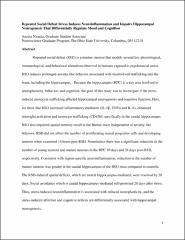 Repeated social defeat (RSD) is a murine stressor that models several key physiological, immunological, and behavioral alterations observed in humans exposed to psychosocial stress. RSD induces prolonged anxiety-like behavior associated with myeloid cell trafficking into the brain, including the hippocampus. Because the hippocampus (HPC) is a key area involved in neuroplasticity, behavior, and cognition, the goal of this study was to investigate if the stress-induced monocyte trafficking affected hippocampal neurogenesis and cognitive function. Here, we show that RSD increased inflammatory mediators (IL-1β, TNFα and IL-6), enhanced microglia activation and monocyte trafficking (CD45hi) specifically in the caudal hippocampus. RSD also impaired spatial memory recall in the Barnes maze independent of anxiety-like behavior. RSD did not affect the number of proliferating neural progenitor cells and developing neurons when examined 14 hours post-RSD. Nonetheless there was a significant reduction in the number of young neurons and mature neurons in the HPC 10 days and 28 days post-RSD, respectively. Consistent with region-specific neuroinflammation, reduction in the number of mature neurons was greater in the caudal hippocampus of the RSD mice compared to controls. The RSD-induced spatial deficits, which are rostral hippocampus-mediated, were resolved by 28 days. Social avoidance which is caudal hippocampus-mediated still persisted 28 days after stress. Thus, stress-induced neuroinflammation is associated with reduced neuroplasticity, and the stress-induced affective and cognitive deficits are differentially associated with hippocampal neurogenesis.