The Ideonym: The Function and Impact of Political Neologisms with Presidential Associations 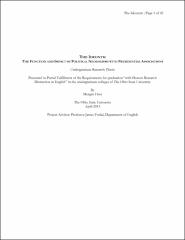 The American public is relying more and more on easily categorized and labeled policies and events to establish/reinforce their political ideologies. American politicians, media pundits, and strategists have noticed this trend and are employing the use of a rhetorical device to associate policy, ideology, and scandal with specific ideas and persons. The use of this rhetorical device, so far largely unexamined and undefined, consists of juxtaposing two words together with the specific purpose of creating a positive/negative association between two people, ideas, or events. Through my research, I intend to delve into the creation, implementation, and effectiveness of these devices (which I have labeled “ideonyms”) from a rhetorical perspective. I will first examine similar but distinct rhetorical concepts, such as McGee’s ideographs, Burke’s “terministic screens”, branding, labeling, etc. to determine the unique definition and function of the ideonym. I will then look at three modern examples of this rhetorical device: “Obamacare”, “Reaganomics”, and the “-gate” suffix (derived from “Watergate”). For each of these ideonyms I will consider the invention of the term and its context, the history of its use and change, and provide rhetorical analyses of some key texts. I will then close with an analysis of the impact of ideonyms by examining polling data, congressional records, major speeches, etc. to understand the impact on voter awareness, opinion, and political strategy. My research suggests that when these ideonyms are employed (as opposed to legal/established labels) the American public is more likely to have a strong opinion on the policy stance but much less likely to have an accurate understanding of the law or ideology.