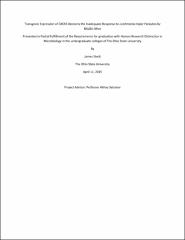 CXCR3 is a chemokine receptor present on mature Th1 cells and has been shown to be critical in the immune response to Leishmania major by C57BL/6 mice. Recent studies have demonstrated that when stimulated, T cells from susceptible BALB/c mice do not increase expression of CXCR3 as quickly or efficiently as resistant C57BL/6 mice. In light of these findings, this study sought to determine how transgenic overexpression of CXCR3 on T cells affects susceptibility to L. major infection in BALB/c mice. Contrary to our hypothesis, CXCR3-transgenic mice were more susceptible to L. major and did not resolve their infections. These mice instead developed a more pronounced Th2 response and developed larger lesions compared to their wild-type littermates. Concentrations of the Th1-associated IFN-γ were lowered in the draining lymph nodes of CXCR3-transgenic mice, while concentrations of the Th2-associated IL-4 and the immunomodulatory IL-10 were significantly elevated, thus contributing to parasite persistence. Other immune cell types including neutrophils and monocytes were heavily affected by the immunological imbalances caused by expression of the CXCR3 transgene. The accumulation of these cells may serve to explain why CXCR3Tg mice were unable to control the parasite. This study shows that overexpression of CXCR3 is insufficient to confer resistance upon BALB/c mice following infection with L. major.