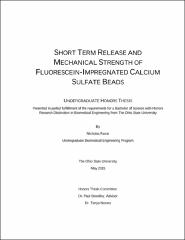 This project is part of a larger project that involves juxtaposing antibiotic elution rates from two common bone cement beads, poly(methyl methacrylate) (PMMA) and calcium sulfate (CaSO4). The beads are impregnated with the antibiotics vancomycin and tobramycin alone or in various combinations. In an attempt to preserve a primary joint or prevent a possible second infection after revision of a total joint arthroplasty, PMMA and CaSO4 beads are commonly infused with antibiotics because of their ability to elute locally high concentrations of them. By investigating this juxtaposition, it can be determined which cements’ antibiotic elution rate may be optimal on a patient-to-patient basis in treating a simulated bacterial infection in vitro. In previous studies, antibiotic-infused beads were placed onto an agar plate inoculated with bacteria in order to determine zone of inhibition (ZOI) of the lawn caused by the antibiotic elution. However, this does not necessarily correlate with medical practice as beads are utilized once a biofilm infection has already been established. Thus, our proposed experimental method simulates a clinical application of these beads being placed where biofilms may already be present. Lawns of Pseudomonas aeruginosa and Staphylococcus aureus were established onto separate plates for 24 hours, and then the beads are introduced to determine their respective zones of killing (ZOK). Bioluminescent strains were used in order to track shutting down metabolic activity and killing of the lawn biofilms in real time. PMMA’s antibiotic elution rate and spread of ZOK were compared to the CaSO4 beads. In this project, we aligned the ZOK assays with the diffusion of antibiotics by using fluorescein-infused PMMA and CaSO4 beads to analyze its diffusion characteristics through an agar plate. Fluorescein, commonly utilized as a fluorescent tracer, is more economical and much easier to track with a gel documentation system than tobramycin and vancomycin. Because this therapeutic method is specific to the patient, the surgeon may impregnate the beads with different amounts of antibiotic. Often times, surgeons will use concentrations outside of the range of manufacturer suggestions, which varies the mechanical strength of the beads. Because any cement additive will influence microstructure, and subsequently mechanical strength and release kinetics, the weights and first cracking strengths of the beads were correlated to varying concentrations of fluorescein impregnation. We determined that with high concentrations of fluorescein, although the beads locally elute at a higher rate, their mechanical efficacy is seriously hindered.