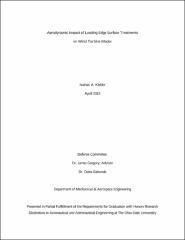 Wind is becoming an increasingly popular source of energy around the world. More wind turbines are being built, and at larger sizes and higher operating speeds than ever before. The presence of abrasive material in the atmosphere leads to erosion of wind turbine blades which can be detrimental to aerodynamic performance and by extension, power production. The leading edge of turbine blades are especially susceptible to this phenomena. It is therefore desired to be able to apply a protective coating to the leading edge of wind turbine blades to guard against erosion. This project investigated the aerodynamic impact of applying a commercial protective leading edge tape to wind turbine blades. A scaled down 2D airfoil and a full scale commercial turbine tip were used as test articles in this study. Experimental investigation was conducted in the Battelle Subsonic Wind Tunnel at The Ohio State University. Measurements were taken via six-axis load cells, surface pressure taps, and wake surveys. It was determined that at low angles of attack, the detrimental lift and drag impact of the treatment would have a significant aerodynamic performance impact, measuring up to 20% drag increase with as much as a 25% loss of lift. However, that impact subsided at higher angles of attack and in some cases became beneficial to performance in the post stall regime, measuring lift improvements of up to 8% in deep stall. The results indicate that the application of leading edge tape may not have a significant detrimental performance impact in typical operating conditions and may help preserve power production in certain adverse scenarios.