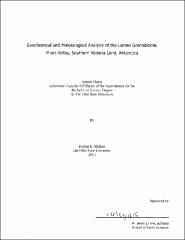 Miers Valley, Southern Victoria Land, Antarctica is located south of Marshall Valley and west of Koettlitz Glacier on the west coast of McMurdo Sound. It is part of the McMurdo Dry Valleys and is ice-free; the region is one of the world’s most extreme deserts in the world. The basement rocks in the valley range from late Proterozoic to mid-Ordovician in age, with pre, post, and synkinemaic deformation occurring throughout. To provide a detailed view of the geochemical environment within Miers Valley, samples of the Larsen Granodiorite were examined for their geochemical, mineralogical and petrographic characteristics. X-ray Fluorescence (XRF) was used to obtain the bulk chemical composition of the Larsen Granodiorite. X-ray Diffraction (XRD) provided the mineralogical composition of this unit by randomly orienting the powdered sample to measure multiple d-spacing between crystal planes. Petrographic microscopy supplemented XRD analysis by providing mineralogical and textural descriptions of the samples. Data gathered via these methods were compared to previous regional studies and compared to upper continental crustal values. The analysis indicated the Larsen Granodiorite is relatively rich in intermediate rock elements of calcium, magnesium, manganese, and phosphorus compared to more felsic upper continental crustal values of silica and aluminum. Trace element data showed the Larsen Granodiorite is poor in nickel, copper, and sulfur, and rich in strontium, and niobium relative to upper continental crust. Mineralogy obtained through XRD indicated the Larsen Granodiorite is abundant in plagioclase and biotite contained within the andesine-labradorite series, and annite-phlogopite series, respectively, when compared to upper continental crustal values. Scanning electron microscopy (SEM) indicated trace amounts of the mineral allanite, (part of the broader epidote group) bearing rare earth elements of lanthanum, cerium, and neodymium. Petrographic analysis indicated partial straining of minerals and chloritized biotite possibly due to the migmatization of granitoid plutons.