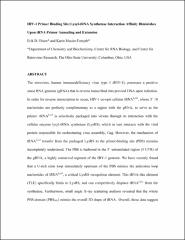 The retrovirus, human immunodeficiency virus type 1 (HIV-1), possesses a positive sense RNA genome (gRNA) that is reverse transcribed into proviral DNA upon infection. In order for reverse transcription to occur, HIV-1 co-opts cellular tRNALys3, whose 3 ́ 18 nucleotides are perfectly complimentary to a region with the gRNA, to serve as the primer. tRNALys3 is selectively packaged into virions through its interaction with the cellular enzyme lysyl-tRNA synthetase (LysRS), which in turn interacts with the viral protein responsible for orchestrating virus assembly, Gag. However, the mechanism of tRNALys3 transfer from the packaged LysRS to the primer-binding site (PBS) remains incompletely understood. The PBS is harbored in the 5 ́ untranslated region (5 ́UTR) of the gRNA, a highly conserved segment of the HIV-1 genome. We have recently found that a U-rich stem loop immediately upstream of the PBS mimics the anticodon loop nucleotides of tRNALys3, a critical LysRS recognition element. This tRNA-like element (TLE) specifically binds to LysRS, and can competitively displace tRNALys3 from the synthetase. Furthermore, small angle X-ray scattering analysis revealed that the whole PBS domain (PBS105) mimics the overall 3D shape of tRNA. Overall, these data suggest a mechanism where structural and functional tRNA mimicry by the TLE in the PBS domain facilitate primer release from LysRS and targeting to the 18 nucleotide PBS. An observation from the structural analysis was that both apoPBS and PBS annealed to a DNA oligonucleotide corresponding to the 18 complementary nucleotides in tRNALys3 (antiPBS18) mimicked the overall tRNA shape to a similar degree. In order to further investigate the function of the PBS/TLE domain, we performed a fluorescence anisotropy-based binding study examining LysRS interactions with the PBS domain in various functionally relevant states. We find LysRS has similar affinities for both the apoPBS105 and PBS105:antiPBS18 complex, confirming the SAXS structure indicating both complexes mimic tRNA shape. In order to investigate if the additional tRNA-gRNA contacts outside of the 18 nucleotides of complementarity affected the LysRS interaction, we tested PBS105:primer complexes containing full-length and 3 ́-half tRNAs, finding that PBS:tRNA primer complexes displayed reduced affinities for LysRS under certain conditions. Also, when progressively extended antiPBS18 primers were annealed to PBS105, mimicking the initial steps of reverse transcription, we observed a concomitant drop in LysRS affinity. These data further elucidate the role that LysRS plays in the evolution of the reverse transcription initiation complex.