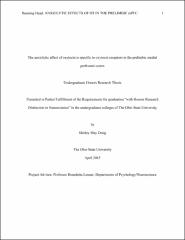 Numerous studies in animals and humans have established that the neuropeptide oxytocin (OT) reduces anxiety. However, the specific brain regions where OT acts to regulate anxiety and the mechanisms by which it does so require further investigation. The medial prefrontal cortex (mPFC) has been shown to play a role in the modulation of anxiety-related behavior. In addition, the mPFC contains OT-sensitive neurons, expresses OT receptors (OTR), and receives long-range axonal projections from OT-producing neurons in the hypothalamus, suggesting that the mPFC may be a target where OT acts to diminish anxiety. In order to address this possibility, we performed five experiments. First we assessed whether the regulation of anxiety by OT is subregion specific within the mPFC. In the second experiment, we determined if the effects of OT on anxiety-like behavior in the prelimbic (PL) mPFC are sex-dependent or neuropeptide specific. The third experiment examined whether OTR activation is required for the anxiolytic action of OT. In the fourth experiment, we examined the importance of endogenous OT in the regulation of anxiety-like behavior using virgin male and female rats that received PL infusions of an OTR antagonist (OTR-A). Finally, given recent studies showing that the mPFC expresses OTR on GABAergic interneurons, we examined the extent to which the anxiolytic effect of exogenous OT in the PL mPFC is mediated via actions on GABAergic neurotransmission using site-specific administration of OT and a GABA-A receptor antagonist, bicuculline. Results show that OT in the PL mPFC decreased anxiety-like behavior regardless of sex. The effect of mPFC OT on anxiety-like behavior was determined to be region specific and neuropeptide specific as anxiety-like behavior was not affected by either OT in other mPFC subregions or by administration of the closely related neuropetide vasopressin into the PL mPFC. Additionally, the anxiolytic actions of OT were shown to be mediated through its binding to the OTR and were blocked by the GABA-A receptor antagonist. In contrast to exogenous OT, endogenous OT did not influence anxiety as anxiety-like behavior was unaffected by administration of an OTR-A. Taken together, these results demonstrate that the anxiolytic actions of OT are specific to OTR in the PL mPFC and may attenuate anxiety-related behavior through utilization of a GABAergic mechanism. In doing so, our study not only provides a better understanding of the neural circuitry underlying OT’s anxiety attenuating actions but also suggests putative targets for the pharmacological treatment of anxiety disorders.