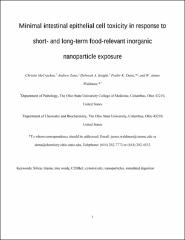 Toxicity of commercial nanoparticles of titania, silica and zinc oxides is being investigated in this in vitro study. Particles of these compositions are found in many food items and thus this study is directed towards particle behavior in simulated digestion media and their interaction with intestinal epithelial cell line C2BBe1, a clone of Caco-2 cells, originally isolated from a human colon cancer. Even though the primary particle size of all three particles was below 50 nm, the particles appeared as aggregates in culture media with a negatively charged surface. In the presence of pepsin (~pH 2), the charge on the titania became positive, and silica was almost neutral and aggregated extensively, whereas ZnO dissolved. For silica and titania, treatment with simulated intestinal digestive solution led to a strongly negatively charged surface and particle sizes approaching values similar to those in media. Based on infrared spectroscopy, we concluded that the surface of silica and titania was covered with bile salts/proteins after this treatment. Transmission electron microscopy (TEM) indicated that the C2BBe1 cells internalized all three particles. Toxicity assays included investigation of necrosis, apoptosis, membrane damage and mitochondrial activity. Titania and silica particles suspended in media at loading levels of 10 µg/cm2 exhibited no toxicity. With ZnO at the same loading level, mild toxicity was observed based only on the LDH assay and decrease of mitochondrial activity and not necrosis or apoptosis. Titania particles exposed to the simulated digestion media exhibited mild toxicity based on decrease of mitochondrial activity, likely due to transport of toxic bile salts via adsorption on the particle surface.