Ethnophytopathology and Survey of Tomato Diseases in Morogoro, Tanzania 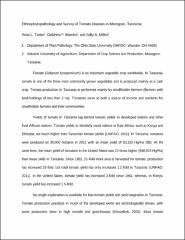 Purpose of Study Tomato (Solanum lycopersicum) is an important crop in the Morogoro Region of Tanzania, providing both income and nutrients to smallholder farmers. Tomato production is constrained by many diseases, but the distribution and severity of key diseases was unknown in the Morogoro Region. Better knowledge of regional tomato disease occurrence leads to improved disease management recommendations for farmers, which can ultimately reduce their reliance on chemical pesticides. To enhance knowledge of tomato diseases in the Morogoro Region, we conducted an ethnophytopathology study to ascertain local plant disease knowledge and a physical survey of tomato diseases in the region. Research Methods The disease survey was conducted in five villages in the Morogoro Region during the wet and dry tomato production seasons. In each village, ten fields were surveyed for tomato diseases. Within each field, three 2-square meter plots were surveyed for disease incidence and severity. A soil health assay was conducted to determine the incidence and severity of soilborne diseases in the region. Soil was collected in each of the disease survey fields and transported to a laboratory, where tomato seedlings (variety ‘Moneymaker’) were grown in these soils. Roots were evaluated five weeks after planting. Roots were rated for symptoms of rot and for incidence and severity of root knot nematode. The ethnophytopathology study was conducted on each farm during the disease survey. Farmers were shown cards with pictures of 20 common tomato diseases and asked to provide the names for these diseases in Kiswahili or their local language. Disease names were translated into English and classified by naming system. Farmers also identified which diseases they felt were most important during both production seasons. Findings The most common diseases during both the dry and wet seasons were early blight (Alternaria sp.), bacterial spot (Xanthomonas sp.), Septoria leaf spot (Septoria lycopersici) and viral diseases. Gray mold (Botrytis sp.) was more prevalent during the dry season, tomato yellow leaf curl virus was more prevalent during the wet season. Root knot disease, caused by species of Meloidogyne nematodes, was found in soils from 39 of 40 fields, indicating that this is a commonly occurring, key disease in the region. Farmers provided local disease names that were most often based on the appearance of disease symptoms, such as ‘yellow disease’ for leaf mold. Local disease names also described disease epidemiology, such as the name ‘fulifuli’ which describes the cloudy, drizzly weather conducive to late blight of tomato. Farmers ranked bacterial spot, root knot nematode, tomato yellow leaf curl virus and late blight as most important for both production seasons. Implications This study highlighted the most commonly occurring tomato diseases in the Morogoro Region. These findings were used to create disease identification and management cards for village farmers. These cards contain management suggestions for key diseases and were distributed to farmers in each of the disease survey villages. These materials have to potential to improve tomato disease management and reduce use of chemical pesticides. Data gathered on local names of tomato diseases will help researchers discuss these diseases and their management with farmers.