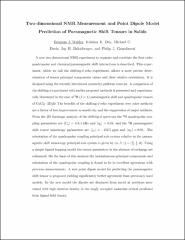 A new two-dimensional NMR experiment to separate and correlate the first-order quadrupolar and chemical/paramagnetic shift interactions is described. This experiment, which we call the shifting-d echo experiment, allows a more precise determination of tensor principal components values and their relative orientation. It is designed using the recently introduced symmetry pathway concept. A comparison of the shifting-d experiment with earlier proposed methods is presented and experimentally illustrated in the case of 2H (I = 1) paramagnetic shift and quadrupolar tensors of CuCl2 · 2D2O. The benefits of the shifting-d echo experiment over other methods are a factor of two improvement in sensitivity and the suppression of major artifacts. From the 2D lineshape analysis of the shifting-d spectrum the 2H quadrupolar coupling parameters are ⟨Cq⟩ = 118.1 kHz and ⟨ηq⟩ = 0.88, and the 2H paramagnetic shift tensor anisotropy parameters are ⟨ζP ⟩ = −152.5 ppm and ⟨ηP ⟩ = 0.91. The orientation of the quadrupolar coupling principal axis system relative to the paramagnetic shift anisotropy principal axis system is given by (α,β,γ) = (π, π,0). Using a simple ligand hopping model the tensor parameters in the absence of exchange are estimated. On the basis of this analysis the instantaneous principal components and orientation of the quadrupolar coupling is found to be in excellent agreement with previous measurements. A new point dipole model for predicting the paramagnetic shift tensor is proposed yielding significantly better agreement than previously used models. In the new model the dipoles are displaced from nuclei at positions associated with high electron density in the singly occupied molecular orbital predicted from ligand field theory.