Collapse Analysis and Testing of an Existing Building 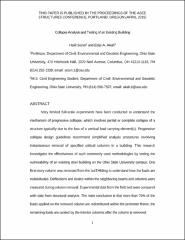 Very limited full-scale experiments have been conducted to understand the mechanism of progressive collapse, which involves partial or complete collapse of a structure typically due to the loss of a vertical load carrying element(s). Progressive collapse design guidelines recommend simplified analysis procedures involving instantaneous removal of specified critical columns in a building. This research investigates the effectiveness of such commonly used methodologies by testing the vulnerability of an existing steel building on the Ohio State University campus. One first-story column was removed from the buiTHlding to understand how the loads are redistributed. Deflections and strains within the neighboring beams and columns were measured during column removal. Experimental data from the field test were compared with data from structural analysis. The main conclusion is that more than 70% of the loads applied on the removed column are redistributed within the perimeter frame; the remaining loads are carried by the interior columns after the column is removed.