A sociophonetic investigation of dialect features in Highland Ecuadorian Spanish 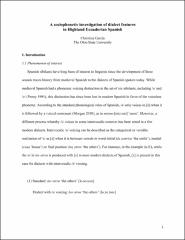 Language and society are known to affect each other in many ways and we can often get a better understanding of social organization through language. The linguistic subfield of sociophonetics aims to understand how sounds can contribute to the formation of social identity. This paper contributes to this broader discussion by examining how linguistic and social factors interact in Highland Ecuadorian Spanish (HES), particularly in the city of Loja. This community, located in the southernmost province of Ecuador, offers an exceptional opportunity to study the social work that language does because after being isolated for many years from other Highland communities, it has recently experienced increased outside influence, both social and linguistic in nature. While Lojano Spanish has many distinctive features, I examine the voicing of /s/ when it occurs between vowels. The variable pronunciation of /s/ as [s] or [z] (for example [losanimales] ~ [lozanimales] ‘the animals’) has been attested in a few modern dialects of Spanish, including HES. I focus on intervocalic /s/ voicing because Loja is at a crossroads between regions that have voicing and those that do not (Robinson 1979, Lipski 1989). I analyze the production of this feature by carrying out a detailed acoustic analysis of thirty-one recordings from my fieldwork data. These recordings come from interviews with native Lojanos, half male and half female, from three age groups. Over 1,300 tokens of /s/ were extracted from these interviews and measured for percent voicing, that is, whether the majority of the segment is more like [s] or [z]. I examine the influence of several linguistic factors on the voicing of /s/: position within the word (word-initial, medial or final), stress (between stressed or unstressed vowels), speech rate, and preceding and following vowel. I chose these independent factors because they have been shown to influence production of Spanish /s/ in many different varieties (cf. Campos-Astorkiza 2011, File-Muriel & Brown 2011). I also look at the influence of two social factors, speaker gender and age, which have often been found to correlate with language use in important ways. Individual speaker was also considered as a random effect and statistical models were fit to the data using the statistical analysis software R. Overall, my results show that intervocalic /s/ voicing in Lojano Spanish is a variable and gradient process, leading to more [s]-like productions in some cases and more [z]-like productions in others. Nevertheless, this variation is not random since it is conditioned by linguistic and social factors, most notably speech style, speech rate, position within a word, stress, and speaker gender. Increasingly voiced ([z]) realizations are more likely in spontaneous as opposed to read speech; in faster speech; in word final and initial contexts as opposed to medial; when /s/ is between unstressed syllables; and in males’ speech. Thus, /s/ voicing in this dialect can be considered a reduction process since it occurs at higher rates in fast speech and between unstressed syllables. However, this variable is also conditioned by phonological and social factors, showing how complex of a process it is. This study is the only one to date to look at intervocalic /s/ voicing in Lojano Spanish, and it improves on previous studies of this variable in other dialects by using quantitative acoustic measures as opposed to impressionistic auditory coding. The findings from my research contribute to the broader understanding of how identity is constructed through language, looking at an understudied variety of Spanish.