Social-Psychological Response to Forced Relocation Due to Watershed Development 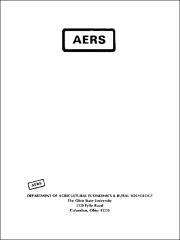 Construction of water impoundment projects often necessitates relocation of numerous rural residents which can result in social disruption of established interaction patterns within affected groups. A research study was conducted within two communities in \.Jest Virginia and two communities in Ohio which had recently been subjected to watershed development. The objective of the research was to evaluate the social-psychological response of local residents to the forced relocation and subsequent disruptive effects of the resettlement. The dependent variable used in the research was community alienation. The findings revealed that the affected community groups were not significantly different in terms of alienation from the non-affected base groups. This finding suggests that forced relocation did not consistently lead to personal alienation from the changed community. It was noted. however, that negative attitudes were identifiable among the affected community members but the negative comments appeared to be directed toward the change agency and toward physical relocation rather than the community per se.