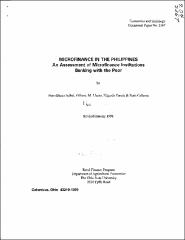 The Philippines, a country of great promise in the 1950s, has greatly lagged behind many other Asian countries. Between 1991 and 1994 urban poverty declined from 26% to 29%; but rural poverty virtually stagnated at a much higher rate: 55% and 54%, respectively. Poverty lending programs were instituted in vast numbers, but undermined the viability of the institutions while their impact remained insignificant. Large numbers of self-help groups and NGOs have been trying to fill the void. Yet those institutions that focus on the poor lack the capacity for substantial outreach to the poor, while those that possess the capacity lack the focus. Despite recent liberalization efforts, policymakers in the Philippines, unlike those in Indonesia, have relied more on government intervention and credit channeling than the self-reliant intermediation of market-oriented microfinance institutions (MFis). In the framework of a wider UNDPsupported program of the Asian and Pacific Development Centre in Kuala Lumpur on Microfinance for the Poor in Asia-Pacific, seven MFis were selected from the Philippines and analyzed in terms of outreach to the poor, resource mobilization, viability and sustainability: six credit NGOs and one cooperative rural bank, all but one of them using the Grameen technology in reaching the poor. Virtually all are subsidy-dependent and donor-driven, though they do adhere to the creed of market rates of interest. Only the cooperative bank was found to be operationally and financially self-sufficient, yet showed little capacity for dynamic growth. While its Grameen-type group technology was profitable and multiplied the bank's outreach, it added so little to its overall profits that management considers its termination. One recommendation stands out from the case studies: transform credit NGOs into formal financial institutions that rely on their own internal resources and cover their costs from the margin! Stop using them as credit channels!