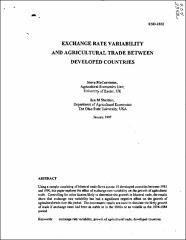 Using a sample consisting of bilateral trade flows across 10 developed countries between 1985 and 1990, this paper explores the effect of exchange rate variability on the growth of agricultural trade. Controlling for other factors likely to determine the growth in bilateral trade, the results show that exchange rate variability has had a significant negative effect on the growth of agricultural trade over this period. The econometric results are used to simulate the likely growth of trade if exchange rates had been as stable as in the 1960s or as volatile as the 1974-1984 period.