Rural Finance in Niger: Credit Unions in the Financial Markets of Zinder and Maradi Departments 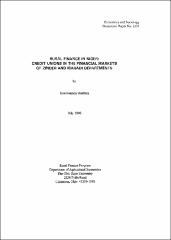 Credit unions, known in Niger as Caisses Populaires d'Epargne et de Credit (CPECs), started in rural areas of Niger with the departments. The purpose of this study was to examine the role of credit unions (CUs) in the Nigerien financial landscape, especially in the rural areas of Zinder and Maradi where they first started. For this study, CU members and non-members in nine villages and towns were surveyed. In each case, an equal number of men and women were interviewed, The main revelation from the survey is that informal finance is still prevalent and even predominant in rural Niger. People still rely heavily on the informal sector for both savings and loans services. Tontines which play an important social function would not be expected to disappear with the advent of credit unions. What is encouraging is the realization that credit unions are in fact complementing the informal sector. They are providing a much needed alternative for financial intermediation, especially to a rural population who has been prevented for too long from accessing formal financial services.