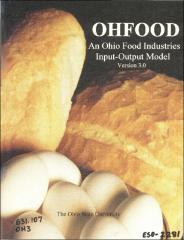 This manuscript provides the basic documentation for a sophisticated input-output model, called OHFOOD for Ohio food. The model is designed specifically to capture the interdependences and linkages among various industries composing the complex economy of Ohio. The input-output model of Ohio's economy also maintains a high degree of detail on the food and agricultural sectors. The interindustry model describes the linkages among various sectors of the economy and provides estimates of the economic influence that expansion of the agricultural and food sectors have on the general manufacturing and service sectors of the economy. Also, OHFOOD may be used to investigate the economic influence of "shocks” to the economy, such as entry of new firms into the state. This documentation provides a succinct analysis of the importance of food and agriculture to the state's economy, based on the interindustry model. The analysis indicates that for 1992 the food and agricultural sectors of Ohio's economy contribute approximately 13 percent of the output, 11 percent of the value added, 16 percent of the total employment, and 11 percent of total income. Of the 5 basic components within the food and forestry production and distribution chain, the food and forestry processing sector is the largest in terms of output, but the food and forestry wholesaling and retailing sectors and the food service sector are the most significant in terms of employment. The entire food and agriculture complex accounts for over 935,400 jobs in Ohio, or about 1 of every 6 jobs. Keeping this model updated with the latest data available is an on-going task of the Farm Income Enhancement Program and the Agribusiness Research Group within the Department of Agricultural Economics of The Ohio State University.