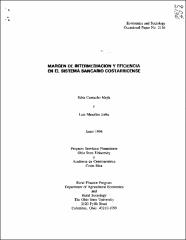 This paper reports on the measurement of intermediation spreads for both private and state-owened banks in Costa Rica, as a proxy for the efficiency in their operation. The study also measures several components of such spreads: operating costs, and costs of reserve requirements, losses due to default, low-return and non-performing assets, implicit and explicit taxes, as well as net income from other services, and intermediary profits. Spreads are measured for 1987-92 and the impact of inflation is separated from real interest rates. The evolution of the regulatory framework is described and its implications for the degree of efficiency of the banks are identified. In addition, the paper discusses the structure of the market and the property rights problems associated with the state-owned banks. The methodology is described in an annex.