Informal Finance and Women in Egypt: "Banks" within Banks 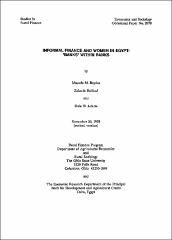 Specialized credit programs for women have emerged recently in many low-income countries. Based on experience in earlier credit programs for other disadvantaged groups, one might expect that these programs for women will encounter difficulties. Relying on research done in Egypt in mid-1993 we suggest an alternative strategy for providing formal financial services to women. Our research focused on informal finance among employees of the Principal Bank for Development and AgriculturaI Credit (PBDAC). Two types of informal finance were studied: self-help financial groups that are called gam’iyas in Egypt, and merchant credits. The study involved a census of gam'iyas operating in 4 village banks, 2 branch banks, one governorate bank, and half the departments in the head office of the PBDAC system. The study covered about 2,500 of PBDAC's 40,000 employees and also included several case studies of bank employees who sold goods to other bank employees on credit. In addition, a case study was done of one community to clarify the extent to which informal finance permeated rural areas. The study found that about 4 in 5 of PBDAC's employees were members of gam'iyas operating within the Bank and that about 9 out of 10 of the households with PBDAC employees participated in gam'iyas. The average person put about $30 each month in gam'iyas, which amounted to 10 to 20 percent of their total bank compensation. Although most of the employees had bank accounts, the majority of these accounts were moribund. In addition, many of the Bank employees also bought goods from other employees on credit. The village study showed that nearly two-thirds of the households participated regularly in gam'iyas, that many of them bought goods from merchants on credit, and that numerous women stored their savings with informal moneykeepers. Many of the merchants in the community competed by selling merchandise and farm inputs on credit. The amount of informal finance found was surprising, given the number of banking facilities that operated in the area studied. We were also surprised by the amount of informal saving that was occurring among people of modest means. The research showed that PBDAC was neither satisfying the financial requirements of its employees nor the demands for financial services by most villagers, especially women. Many Egyptians make deposits in gam'iyas and with moneykeepers and likewise extensively use small and short-term loans from gam'iyas as well as from merchants. Using informal finance as a proxy, banks in general, and PBDAC in particular, are not providing some of the types of financial services that are most popular in Egypt, particularly among women. At the same time, women play a prominent role in many popular forms of informal finance, demonstrating that many of them are financiaIIy literate. PBDAC and other hanks in Egypt are providing few financial services to their own employees, thus encouraging the operation of informal banks within banks. If formal banks cannot compete with informal finance in their own offices, they will be unable to effectively compete with informal finance in the rest of the economy. It appears that PBDAC has opportunities to expand their female client base, especially in rural areas. They might do this by assigning female employees to seek more women clients, especially as depositors. Some of these depositors might later qualify as borrowers if the bank adjusts its lending technology to provide more small and short-term loans. PBDAC might also indirectly expand the informal credit available for women by increasing its formal lending to rural merchants. A moderately successful PBDAC program that attracted women clients would result in millions of Egyptian women having sustained access to formal financial services. In contrast, targeted credit programs for women will likely have difficulties in providing sustained credit access for several thousand women in the country.