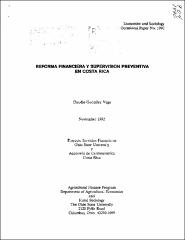 This paper examines the role of financial reform within a structural adjustment program. It discusses two potential functions of the financial system: as a tool for market integration and as a fiscal instrument. In its former role the system provides monetization, currency exchange, intermediation, and risk management services. In the latter role, taxes are levied and subsidies granted through the financial system and planning criteria, rather than market forces, are used to allocate resources. Financial reforms with a strong fiscal objective are doomed to failure. Market-oriented reforms must face several dilemmas. In a bank-dominated system, the potential conflict between the monetization and intermediation functions highlights the importance of prudential supervision. Increased competition increases the burden on the supervising authorities, as well. Structural adjustment programs drastically alter the profitability of borrowers, changing the performance of existing portfolios. The paper briefly discusses proposals to deal with these issues in the Costa Rican context.